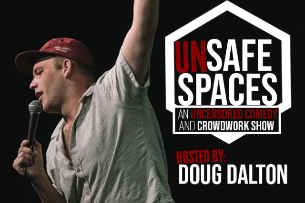 UN-Safe Spaces is a hybrid comedy show highlighted by Doug Dalton (iCrime) and his frenetic blend of storytelling and high-energy crowd work. It will feature sets from traveling, headlining comedians from around the country!

A portion of the show will INVOLVE THE AUDIENCE! Host Doug Dalton will open the show with his COMPLETELY IMPROVISED crowd roast set in which he will “get to know” his audience a little better.

PLEASE arrive early to put your name in the bucket if you would like to be involved or roasted! You might be called on stage to be roasted or to tell a joke of your own!

COMPLETELY UNCENSORED! If you are easily offended PLEASE STAY HOME! Consider this show a safe place from “Safe Places”.

Get your tickets NOW!

In October of 2022, Dalton made his television debut on the new TV show, iCrime with Elizabeth Vargas (Americas’s Most Wanted). He was also recently appeared on the Wide World of Doug’s Podcast with Doug Benson and his comedy has been featured on ESPN Radio in Houston.

He was also a semi-finalist in the 2018 Funniest Person in Texas competition and 2019 Best Comic in Houston competition.