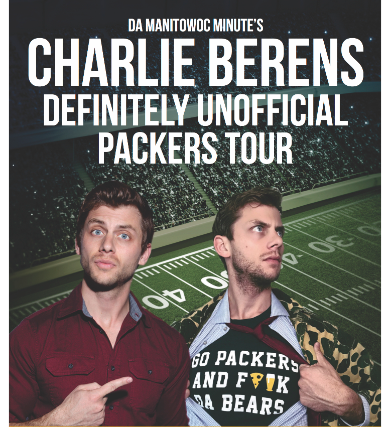 Comedian, host, actor and Emmy-winning journalist Charlie Berens is a dynamic talent in the comedy world. Berens is the creator and star of the Manitowoc Minute. In 6 months he transformed the viral video series into an hour-long variety show selling out venues, sometimes within minutes. Charlie’s career extends beyond the Manitowoc Minute. From creating content for Funny or Die, TBS Digital and Fox Sports 1, to hosting shows for Fox, CBS Sports Network and Variety, Berens’ skill set proves invaluable in a rapidly changing media landscape.

Born and raised in Milwaukee, Wisconsin, Berens has always had a love for satire. Growing up watching Jon Stewart and Stephen Colbert inspired him to study journalism at the University of Wisconsin. As a junior he was hired by MTV to cover the presidential election. That began Berens’ unique blend of journalism and comedy.

After MTV, Berens hosted for the emerging comedy news platforms like OneMinuteNews and HyperVocal. He spent months on the road covering the presidential elections. In 2012, Tribune Media tapped Berens to host their late night comedic news show Nightcap. While at Nightcap, he and co-host Zuri Hall (E! News) wrote and produced sketch comedy. They would later use their experience in local news as inspiration for their scripted series Co-Anchor Confidential. In 2016 Berens sold the concept to LOL, a network partnership between Kevin Hart and Lionsgate.

In 2014 CBS Sports Network hired Berens to host the sports gameshow You’re So Money. Also in 2014, PMC (Variety, Deadline) made Berens the host of their comedy/entertainment news brand @Hollywood. From red carpets to Sundance to SXSW to Coachella, Berens has interviewed hundreds of celebrities, politicians, actors, and musicians.

Berens is regularly featured on Funny or Die. His comedic mashups including “If Jack Dawson Was Really From Wisconsin” have garnered more than 13 million views. Additionally, he performs stand up around the Los Angeles area, and occasionally hosts events for Samsung and Variety.