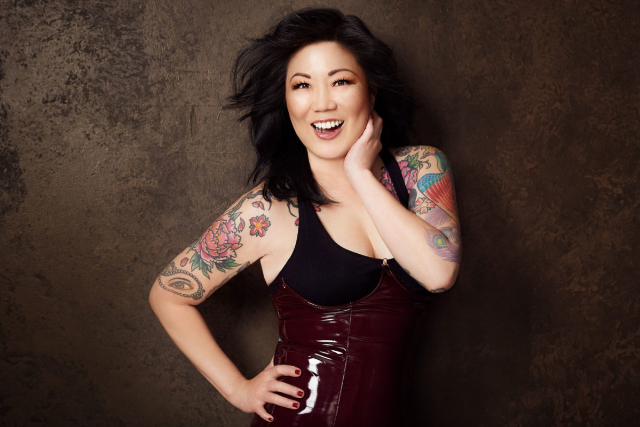 Just a few of the adjectives that describes Margaret Cho, a jack of all trades, master of many. When hasn’t Margaret and her voice been a part of our consciousness? It seems like she’s always been here, lighting the path for other women, other members of underrepresented groups, other performers, to follow.

Margaret was born and raised in San Francisco, an experience that she can say with all sincerity helped to shape her world-view. “There were old hippies, ex-druggies, burnouts, drag queens, and Chinese people. It was a really confusing, enlightening, wonderful time.”

Right as she was starting her stand-up career at age 14, Margaret won a comedy contest to open for Jerry Seinfeld in the early ’90s. She soon moved to Los Angeles and, still in her twenties, hit the college circuit, where she became the most booked act in the market and garnered a nomination for “Campus Comedian of The Year.” She performed over 300 concerts within two years. Arsenio Hall introduced her to late night audiences, Bob Hope put her on a prime time special and, seemingly overnight, Margaret Cho became a household name.

Her groundbreaking, controversial ABC sitcom, All-American Girl (1994) soon followed. Oddly, while ABC courted her because she was a non-conformist Korean American woman with liberal views, the powers-that-be decided Margaret should “tone it down” for the show. Although she was an Executive Producer, this would be a battle she could not win. The experience was a traumatic one, bringing up unresolved feelings left over from childhood; Despite all of her successes, feeling left out and alienated are subjects still near to Margaret’s heart. She has gladly become the “Patron Saint of Outsiders,” speaking for those who are not able to speak for themselves, and encouraging people to use their voice to promote change.

In 1999, her groundbreaking Off-Broadway one-woman show, I’m The One That I Want, toured to national acclaim and was made into both a best-selling book and feature film of the same name. After her earlier experiences, she made sure she would control the distribution and sales of her film, an unusual move at the time. I’m The One That I Want received incredible reviews. In 2001, Margaret launched Notorious C.H.O., a smash-hit 37-city national tour that culminated in a sold-out concert at Carnegie Hall. Notorious C.H.O., hailed by the New York Times as “Brilliant,” was released as a feature film and aired on Showtime.

In March of 2003, Margaret embarked on her third sold-out national tour, Revolution. It was heralded by the Chicago Sun Times as “Her strongest show yet” and the CD recording was nominated for a Grammy forComedy Album of the Year. In 2005 she released Assassin, with The Chicago Tribune stating “(Assassin) packs passion in to each punch.”

In 2007, Margaret hit the road with Cyndi Lauper, Debbie Harry and Erasure to host the True Colors tour, benefiting the Human Rights Campaign. An entertainment pioneer, she also created and starred in The Sensuous Woman, a live variety show featuring vaudevillian burlesque and comedy, which she took for an extended Off-Broadway run.

Margaret returned to television in 2008 with the VH1 series, The Cho Show. Describing it as a ‘reality sitcom,’ Margaret said at the time, “It’s the closest I’ve been able to come to what I do as a comic on TV.”

The aptly titled Beautiful tour came next, exploring the good, bad and ugly in beauty and the marketers who try to shape our world-view. The concert premiered in Australia at The Sydney Theater, marking the first time Margaret debuted a tour abroad.

In 2009, Margaret nabbed a starring role in the comedy/drama series Drop Dead Diva, which aired for six seasons on Lifetime.

Never one to shy away from a challenge, Margaret participated in Season 11 of Dancing with the Stars in 2010. Memorably, Margaret performed wearing a gay-pride-supporting rainbow dress during a time when the issue of suicides among gay youth was on the rise due to bullying. “I was very proud to have been able to wear a gay pride dress on a show that is so conservative”

2010 culminated with another high honor, a second Grammy Award nomination for Comedy Album of the Year for Cho Dependent, her incredibly funny music album. Featuring collaborations with Fiona Apple, Andrew Bird, Grant Lee Phillips, Tegan & Sara, Ben Lee and more, the album received critical acclaim, not only for the topics she tackled, but also for her musicianship.

In 2011, Margaret released the live concert film of Cho Dependent, which also had its cable network debut on Showtime. Shot at the Tabernacle in Atlanta, GA, the performance was characteristically no-holds-barred.

In 2012, Margaret spent whatever free time she had crafting her all new stand-up show, the uproarious MOTHER, which kicked off with both a US and European tour. According to Margaret, “MOTHER offered an untraditional look at motherhood and how we view maternal figures and strong women in queer culture.”

Margaret’s creative side moved full speed ahead with an Emmy nomination for Outstanding Guest Actress on 30 Rock,where she played Kim Jong II. 2015 also brought Margaret back to the stand-up stage withPSYCHO. Called “wildly kinetic” by the New York Times, PSYCHO ended up being a sad prediction of our future. Said Cho at the time, “It’s about the insanity, the anger I feel about everything happening in the world, from police brutality to racism to the rising tide of violence against women.”

The five-time Grammy and Emmy nominee released her second studio album, American Myth, earning her another Grammy nomination for Best Comedy Album. In 2017, Rolling Stone magazine named her one of the 50 Best Stand-Up Comics, calling her “the sort of funny, sex-positive feminist and LGBT activist younger comics continue to look up to.”

Her 2018 Fresh off the Bloat tour is still going, even if Covid shuttered it down in 2020. When asked to describe how the show will evolve, she said, “When we go back out into a semblance of normal life, the show will take on everything that has happened while we were social distancing. It was a deep period of reflection where all comedians had to figure out how to live life without hearing laughter. It felt suffocating but also uplifting. I learned so much about myself and the world by staying still. I want to share the things I laughed at, alone, with the world.”

2019 and 2020 saw Margaret jump back in to acting roles. She kicked off ’19 as the Poodle on the first Season of the wildly successful show The Masked Singer on FOX, appeared in a 2019 episode of Law & Order: SVU and an episode of HBO’s critically acclaimed series High Maintenance. In 2020, Margaret appeared in three films – she played a ruthless Hollywood movie studio exec in Faith Based, “Fairy Gay Mother 1” in Friendsgiving, starring Kat Dennings and Malin Akerman, and “Auntie Ling” in Netflix’s first major animated film, Over the Moon, which Vulture called “one of the most gorgeous animated films ever made.” As if she wasn’t exercising that artistic muscle enough, she launched her own podcast, “The Margaret Cho,” where the first part is a chat with a celebrity friend you already know and the second part is with an up-and-coming artist you may not know yet.

With so much success in her creative life, Margaret still finds time to support the causes that are important to her. She is incredibly active in anti-racism, anti-bullying, and gay rights campaigns. She was the recipient of the Victory Fund’s Leadership Award, the first-ever Best Comedy Performance Award at the Asian Excellence Awards, the First Amendment Award from the ACLU of Southern California, and the Intrepid Award from the National Organization for Women (NOW). Margaret has been honored by GLAAD, American Women in Radio and Television, the Lambda Legal Defense and Education Fund, the National Gay and Lesbian Task Force (NGLTF), the Asian American Legal Defense and Education Fund (AALDEF), PFLAG and LA Pride, who gave Margaret a Lifetime Achievement Award for leaving a lasting imprint on the LGBT community.

Margaret will also be honored by the She Rocks Awards in January, 2021. The award credits women who display unique talent and leadership within the music industry. Previous award recipients include Melissa Etheridge, Pat Benatar, Suzi Quattro, Chaka Khan, Ronnie Spector and more. It seems only fitting that Margaret should start the new year alongside some other bad ass women.