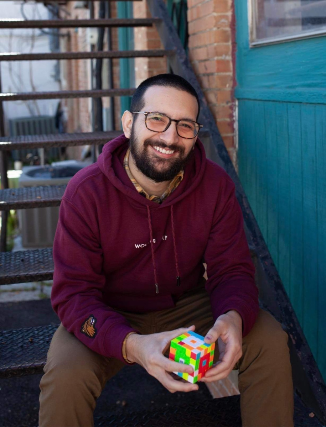 Vinnie Corrales answers the age old question, "What do Pre-K teachers do at night?" By way of Texas, Corrales uses his clever irreverence and grounded surrealism to entertain audiences in clubs across the region with an array of tales ranging from life as a teacher to being the product of, and someone currently in, an interracial marriage. His witty, yet vulnerable, misdirects leave crowds enamored with his ability to redefine what can be funny.

Corrales has been seen on ESPN’s Bettor Days (Disney+/Hulu); his comedy has been featured in publications including Theater Jones and Voyage Magazine; he’s participated festivals including SXSW, Tower City and Dallas Comedy Festivals; and he’s shared the stage with comedians including, but not limited to Ali Macolfsky, Brian Kiley, Shane Torres, and Steve Byrne. But the most gratifying accolades of his one man show are his back-to-back “Teacher Of The Year” awards.

Corrales exercised his “open carry” right by breaking out a rubik’s cube for his #1 debut comedy album “Rebel Without Applause: Live from Texas” available now (in select stores and) on Apple Music/iTunes/Spotify/Amazon/Pandora/etc. When he's not onstage making strangers laugh, he can be found with his wife riding his motorcycle or anthropomorphizing their cat/bulldog.