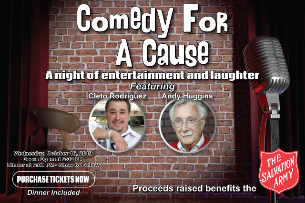 Salvation Army Comedy for a Cause

Join us at the Laugh Out Loud Comedy Club on Wednesday, October 16th for a night of delicious food & Fun and Stand-up Comedy from some of the funniest Texas comedians in the country! Comedy For A Cause is brought to you by Platinum Wealth Solutions of Texas. Food served up by El Jarro Restaurant.
All proceeds go towards supporting the vital programs of The Salvation Army.
Help those in need by attending the show or by making a donation.
6:30 PM Doors Open
7:00 PM Dinner – Show to follow

About Cleto
Born and raised in San Antonio, Texas, Cleto Rodriguez is living his lifelong dream of becoming an elite stand-up comedian.
Rodriguez has been performing since 1995 and has worked with comedians George Lopez, Carlos Mencia, Daniel Tosh, Wayne Brady, Brett Butler, Tim Hawkins and Bob Smiley. He has even opened for living legend B.B. King.
Rodriguez performs nationwide in comedy clubs, corporations, colleges and churches. He was chosen as the comedian for the 2008 Promise Keepers events in seven U.S. cities.
Rodriguez connects with audiences by relating everyday life experiences. Anything and everything is fair game, from marriage mishaps to the challenges of dieting. His comedy is high-energy, observational and hilarious with a brilliant Latino twist.
He has strong San Antonio roots going back to his grandfather, San Antonio native Cleto Rodriguez I, who was one of Texas’ first Congressional Medal of Honor winners. Rodriguez also contributes his time and talents to the community by helping raise money for disadvantaged youth and the homeless.
From clean comedian to TV personality, you can catch Rodriguez daily as the latest morning personality on News 4 WOAI Today. You can also catch him on Gabriel Iglesias’ Comedy Central special fall 2011.

About Andy
Houstonian Andy Huggins, Most recently seen on Americas Got Talent, Andy is a graduate of both The Comedy Store in Los Angeles and Houston’s legendary Comedy Workshop, he has opened for acts ranging from Ray Charles to Billy Gardell. In addition, Andy has written for Bill Hicks, Jay Leno, and Billy Crystal on The Academy Awards.

About The Salvation Army
For 130 years The Salvation Army has served the San Antonio community through eliminating food insecurity and offering shelter for men, women and families requiring emergency housing resulting from difficult life circumstances or natural disasters. Our Permanent Supportive and Rapid Rehousing programs have contributed to the priority of decreasing the chronic homeless population. The Salvation Army homeless prevention programs offer additional rental; utility; and food pantry assistance. Aligning with the local commitment to reduce veteran homelessness, various supportive services are available for veterans and their families. Ensuring that seniors remain active participants in the community, programs are available at several locations to encourage adequate nutrition; wellness; arts/culture and socialization activities. The Peacock Boys & Girls Club serves children with after school care; out of school summer programs; and camp experiences. All services are provided in a compassionate and nurturing environment to restore hope and dignity.

For more information or to purchase tickets, please call the Salvation Amy at (210) 352-2000 or email [email protected]