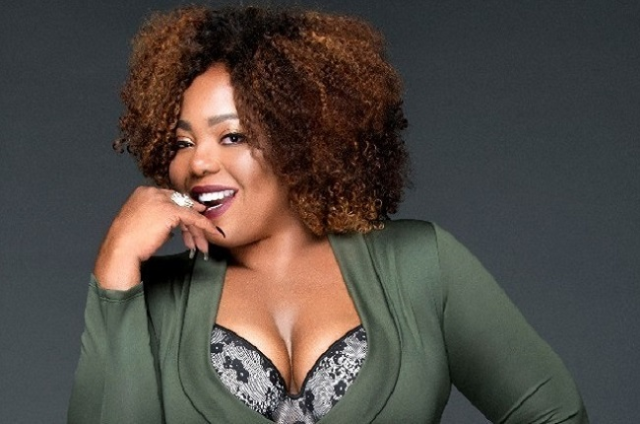 If you took a dab of Richard Pryor’s honesty a teaspoon of Clair Huxtable’s educated fervor and a cup of Pearl Bailey’s girl next door sassiness you’d get a dynamic dish known as CoCoa Brown. Not only a comedian but educated and well-rounded women with a Masters in Education that will make you laugh as you are getting 'schooled" on a variety of topics!

With animated facial expressions body gestures and the material to back it up audiences are taken on a hilarious voyage through the eyes and mind of Brown. Whether she’s talking about herself relationships or the world we live in Brown offers a variety that appeal to all. One-dimensional she is not and you will never see the same set twice. “Once I get rolling I feed off of my crowd I love bringing them into my world ” explains Brown. “I believe in being able to give the crowd what they want and I’m able to take my set in any direction at the drop of a dime.” Versatile Brown can deliver on command a squeaky clean ‘there’s-deacons-in-the audience’ type of show and then make a 360-degree turn and give a show that would make even Don Rickles blush.

Delivering an honest and humorous show Brown has generated a large and loyal following all over the world. Audiences are treated to Cocoa’s thought-provoking humor in which she declares “I don’t tell jokes I tell the truth!” Not only do they get a great show but they feel as though they have gained a friend. She has a style that relates to both women and men and an energy and warmness on and off the stage that has earned her the respect and love of crowds and colleagues alike.

Brown has performed in front of a variety of audiences including Kennedy Center Honors Richard Pryor Def Comedy Jam Tour and on Bill Bellamy’s “Who’s Got Jokes” competition on TV1. She has appeared on nine consecutive seasons on BET’s Comic View twice being voted “Funniest Female” on the popular show and was reigning champion in the Comedy TKO on Showtime at the Apollo and she has appeared on the Starz in Black comedy series “The 1st Amendment” produced by Martin Lawrence. She has also been featured on Comedy Central’s “Comic Groove” with Tracy Morgan and was a featured comedian on BET’s stand up show “One Mic Stand”.

Her film credits include “Lakeview Terrace” with Samuel L. Jackson “American Carol” with Kelsey Grammar “Hittin’ the Bricks” with Dr. Dre “Blue Moon” “Friendship” with Seann William Scott (Stifler from American Pie) “Robbin’ in da Hood” and “Mahogany Blues”. She also appeared in the cutting edge comedy “Biting Personalities” at the 2008 Sundance Film Festival. Cocoa completed filming this past spring the new film “Quiet” with Emmy winning director Lauren Fash. In the winter of 2012 Cocoa landed one of the coveted leading roles in the new Tyler Perry film Single Mom’s Club which is doe in theaters May 2014.

Cocoa has worked on many TV projects in which she always brings her unique personality through in all her characters. Her television credits show the wide range Cocoa is capable of playing. From concerned parent on “The Young and The Restless ” to the sassy receptionist on NBC’s “Las Vegas” to the baker with allergies to chocolate on “ER” to the cheeky mail lady on AMC’s “Breaking Bad” . But Cocoa will always stay true to her love for “funny” and sketch comedy. She’s been Star Jones on Nick Cannon’s “Short Circuitz” a “spooky” beautician on Ashton Kutcher’s “Room 401" and a Judge from hell on “Next” all on MTV to Morgan Freeman’s Mom and Barack Obama’s BIGGEST fan on Frank Caliendo’s sketch show “Frank TV” to the queen of ghetto beat downs on the news sketch show “Chocolate News” created by David Allen Grier on Comedy Central. Cocoa has also appeared on the hit CBS show “2BrokeGirls” created by “Sex in the City” creator Michael Patrick King and as the loveable nail technician Chardonnay on the ABC show Good Christian Belles. And not one to forget the kiddies you can catch Cocoa as Nurse Vickers on the hit Nickelodeon show "Victorious" and as Security guard Janice on the new Disney show Austin & Ally.

She currently stars as the “too funny and too real” character “Jennifer” on the hit Tyler Perry sitcom “For Better or Worse” on TBS and has recurring roles on the new Byron Allen produced sitcom “The First Family”.

Commercially she has appeared in a wide range of national and regional advertisements. Cocoa was the 2006 spokesperson for SBC-AT&T Wireless internet she made you choose Foster Farms chickens after choking an imposter in the Foster Farm campaign and as the cell phone obsessed Mom for Albertson’s supermarkets. Currently you can catch Cocoa massaging Super Bowl Champion Troy Aikman's head in the very funny NFL on Fox promos.

Cocoa has also a sharpened her columnist chops writing for publications like Honey and In the Mix magazines on a monthly basis and has written numerous half hour comedy scripts including the smash hit webisode series “The Raynecat Show” in which Cocoa played the crazy character “ LaTanya”. Her episode “Church in a Box” can be seen on the popular outlet YouTube which is getting major hits each day.

Cocoa is a somewhat of a renaissance artist producing writing and directing 2 stage plays “Judgment Day” and “Dear Hollywood” both featured and receiving rave reviews at the 2009 NAACP Theatre Festival (excerpts of both plays can be seen on www.youtube.com). She’s also developing a sitcom and sketch comedy show for TBS with major producers already attached. She is also currently writing her book and preparing her one-woman show “Confessions of a Suicidal Diva ®” and “Comedy Cookin’ with Cocoa®”. Also Cocoa hosts and executive produces with her husband actor Bubba Ganter her own weekly Blog Bitter2Bride© on YouTube and Face book where she gives the world a weekly dose of TRUTH about today's issues.

Whether you need a stand-up comedian for your next corporate event or your Grandmother's birthday party or a motivational speaker to get your message across Cocoa Brown is just that versatile to connect to your crowd and bring you funny all the same time.